Home Viral “I will rather visit 4 countries than feed 600 people at my...

A young man has taken to social media to condemn the idea of spending lavishly on wedding celebrations as he suggests the option of touring other countries with the money.

According to a Twitter user identified as @kingfoye_, the tradition of spending a large amount of money on a wedding is ridiculous compared to the supposed intimacy that the union is supposed to be about.

READ ALSO :  My Aunty wanted to send me to school but I refused because of my boyfriend and I saw this on his phone, my heart is bleeding - Heartbroken lady

He, however, suggested the option of investing such money in making memories around the world with his newly wedded wife.

“I will rather visit 4 countries in two weeks than feed 600 people at my wedding.
Honestly, wedding should be about sharing intimate moment together as new couples.

Makes more sense to spend more exploring the world together than having 600 guests debate whether the jollof was spicy or not
People saying you can’t control no of guests at an African wedding. Says who? Fixing my wedding on a Monday.” 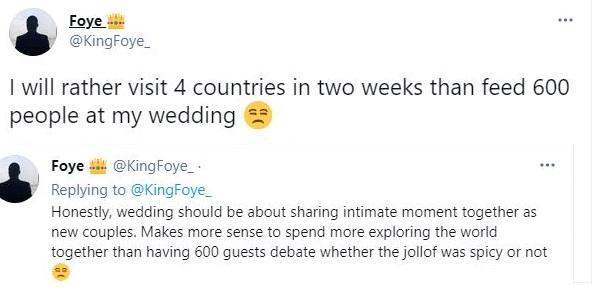 Hilarious! Lady recalls how the ‘Holy Spirit’ woke up her husband after he slept off without kissing her

My girlfriend’s mother is so sweet and good in bed, what do I do with my girlfriend?-Man quizzes