A Manchester City’s kit man has put a Range Rover for sale on eBay that was gifted by the departing club legend Sergio Aguero.

The Argentine striker organised a raffle for staff before saying his emotional goodbyes and joining Barcelona as a free agent last week.

Before he left, Ally Marland, a popular member of the backroom staff since he joined in 2012, was the lucky winner and was handed the keys in the car park by Aguero. 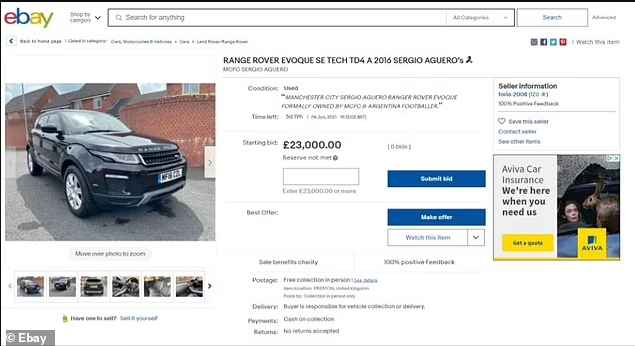 A total of five percent of the sale will be donated to Derian House Children’s Hospice in Chorley as a kind gesture from the couple.

‘We are aware of the work they do and how they rely on donations to operate,’ Nicky told the Sun.

Aguero in addition to the raffle with the Range Rover, spent £60,000 in total on watches for each of the 60 members of City’s first-team staff. Each of them were given either a Hublot or Tag Heuer watch which had the words ‘Gracias! Kun Aguero’ engraved.