Home Viral “My girlfriend sponsored another man through university with business I set up...

A Young man is left in pain after his girlfriend whom he set up a business for diverted the resources on another man.

According to a Twitter user identified as @Ikhuoria__, the love of his life had another man in her life whom she spent all her profits on to send him through university.

Taking to his page to express the hurt, he wrote;

READ ALSO :  Man reveals what he did after a lady told him she can’t marry a man whose mother is alive

”I was in a relationship with a girl back then. I opened a POS shop for her to handle since she didn’t have a job, while I have my own personal business i am running. I never knew this babe was using my money to sponsor a guy to complete his university education.

I didn’t even know not until she came to my house to spend weekend. But as she was bathing, a message pop from her phone. I started to read the message.

The guy was telling my babe that he need foodstuffs that she should send him money. When I asked her she told me the guy was her ex.

I trusted her so much. I was really in pains when she told me.” 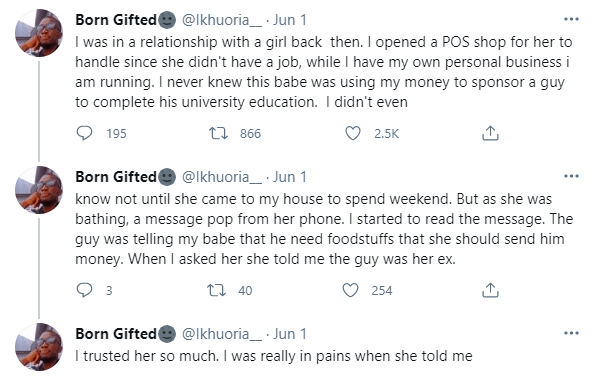